Preparations for the Hour of Code are kicking into high gear, with more than 70,000 organizers signing up to plan activities to get students (and others willing to learn) excited about programming.

Central to the Hour of Code events are one–hour tutorials, which are fun ways of showing students—via games, apps, stories, animations, and more—how code works. An exciting new offering this year is the Star Wars tutorial, which enables users to learn basic concepts of programming using "blocks" of code while building their own Star Wars game. The game is available in several languages. More new tutorials are in the pipeline.

If you’re a software engineer, volunteer to spend an hour or two in a classroom and spark imaginations—this is a great opportunity to engage young minds in the technologies of the future!

Since 2009, ACM has partnered with Code.org , a nonprofit coalition dedicated to expanding computer science education. Computer Science Education Week is held annually the second week in December in recognition of the birthday of computing pioneer Admiral Grace Murray Hopper. 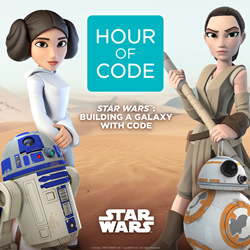