ACM is joining with the University of Oxford and the Computer History Museum to celebrate the 200th birthdays of Ada Lovelace (1815—1852) and George Boole (1815—1864). The bicentennial events will feature exhibits, lectures and a symposium on their lives and fundamental contributions to computing and computer programming.

The exhibit "Ada Lovelace: Computer Pioneer" will be on view at the Weston Library in Oxford, UK from October 13—December 20. The exhibit is based on collections held in the Bodleian Library and the Oxford Museum of the History of Science. The Ada Lovelace 200 Symposium: Celebrating the Life and Legacy of Ada Lovelace will take place December 9—10, with ACM President Alexander Wolf, ACM Vice President Vicki Hanson, Communications of the ACM Editor–in–Chief Moshe Vardi and ACM–W Chair Valerie Barr participating. (Please register for the symposium by November 23.) Check the events calendar for more lectures and other events.

ACM will fund live streaming of the Lovelace symposium. More details are forthcoming.

The Computer History Museum in Mountain View, California will host George Boole: Father of Digital Logic on November 16, which includes a screening of a biographical film at 6:30 p.m. PST followed by a panel discussion. The video screening and lecture are free to the public. Register here and print a poster, which has more information about the film and lecture.

The public opening of the Computer History Museum's Ada Lovelace Exhibit is December 10. On December 13, the Museum will host "Adapalooza," a community day focused on Ada Lovelace that is open to the public and emphasizes family activities. A special ACM weekend (January 23—24, 2016) will offer ACM members, their families and guests free admission to the Museum. In addition, ACM members can receive a 10% discount on admission to the Computer History Museum, as well as on Museum membership. 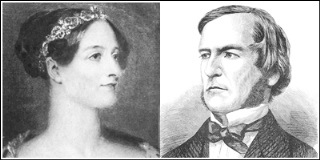