ACM has elected Cherri M. Pancake as President for a two-year term beginning July 1. Pancake is Professor Emeritus and Intel Faculty Fellow of the School of Electrical Engineering and Computer Science at Oregon State University and Director of the Northwest Alliance for Computational Science and Engineering (NACSE).  Her vision as President is to proactively engage researchers, educators and practitioners in emerging areas of computing through providing conference and publication opportunities that will help drive advances in their fields.

Also elected to two-year terms were Vice President Elizabeth Churchill, Director of User Experience at Google in Mountain View, California; and Secretary/Treasurer Yannis Ioannidis, President and General Director of the “Athena” Research and Innovation Center in Athens, Greece and Professor of Informatics and Telecom at the University of Athens.

In addition, Members-at-Large elected to four-year terms are Claudia Bauzer Medeiros, Professor of Computer Science at the University of Campinas, Brazil; and Theo Schlossnagle, Founder and CEO of Circonus, Fulton, Maryland. They will serve four-year terms from July 1, 2018 to June 30, 2022. 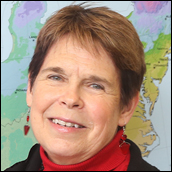