ACM has named Yoshua Bengio, Geoffrey Hinton, and Yann LeCun recipients of the 2018 ACM A.M. Turing Award for conceptual and engineering breakthroughs that have made deep neural networks a critical component of computing.

Working independently and together, Hinton, LeCun and Bengio developed conceptual foundations for the field, identified surprising phenomena through experiments, and contributed engineering advances that demonstrated the practical advantages of deep neural networks. In recent years, deep learning methods have been responsible for astonishing breakthroughs in computer vision, speech recognition, natural language processing, and robotics—among other applications.

The ACM A.M. Turing Award, often referred to as the “Nobel Prize of Computing,” carries a $1 million prize, with financial support provided by Google, Inc. It is named for Alan M. Turing, the British mathematician who articulated the mathematical foundation and limits of computing. Bengio, Hinton and LeCun will formally receive the 2018 ACM A.M. Turing Award at ACM’s annual awards banquet on June 15 in San Francisco, California.

“Artificial intelligence is now one of the fastest-growing areas in all of science and one of the most talked-about topics in society,” said ACM President Cherri M. Pancake. “The growth of and interest in AI is due, in no small part, to the recent advances in deep learning for which Bengio, Hinton and LeCun laid the foundation. These technologies are used by billions of people. Anyone who has a smartphone in their pocket can tangibly experience advances in natural language processing and computer vision that were not possible just 10 years ago. In addition to the products we use every day, new advances in deep learning have given scientists powerful new tools—in areas ranging from medicine, to astronomy, to materials science.” 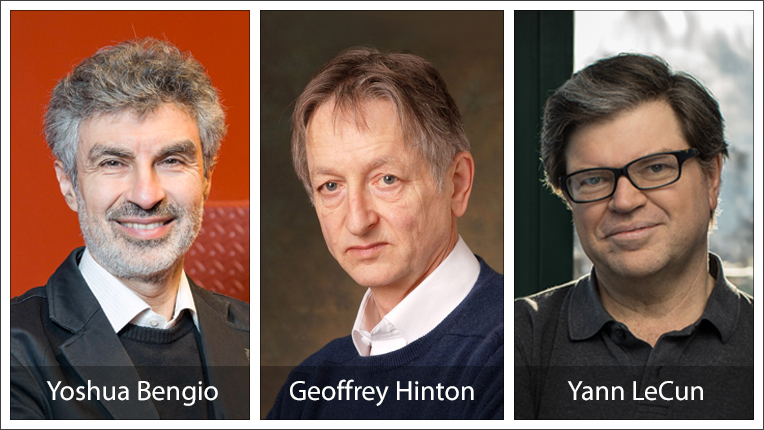