The ACM Awards Banquet is an annual event recognizing technical excellence and outstanding service to the computing field. This year's banquet honoring the 2018 award recipients and newly inducted ACM Fellows was held at the Palace Hotel in San Francisco on June 15.

The ACM A.M. Turing Award was presented to Yoshua Bengio, Geoffrey Hinton, and Yann LeCun for conceptual and engineering breakthroughs that have made deep neural networks a critical component of computing. 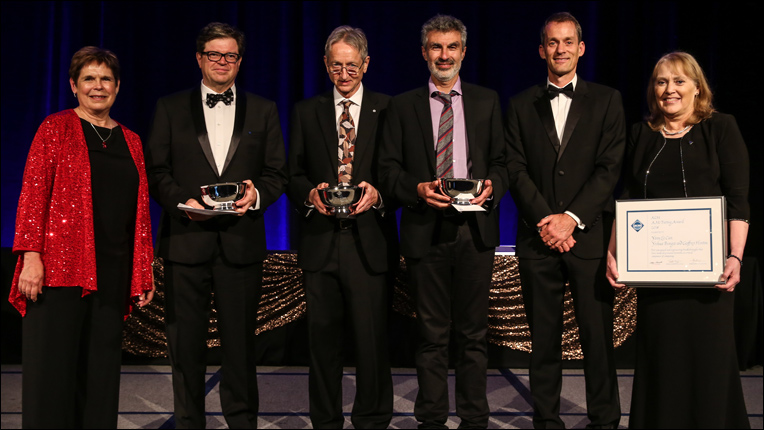 The ACM Prize in Computing was presented to Shwetak Patel for contributions to creative and practical sensing systems for sustainability and health.

The ACM Prize in Computing (formerly the ACM - Infosys Foundation Award in the Computing Sciences) recognizes an early- to mid-career fundamental innovative contribution in computing that, through its depth, impact and broad implications, exemplifies the greatest achievements in the discipline. The award carries a prize of $250,000. Financial support is provided by Infosys. 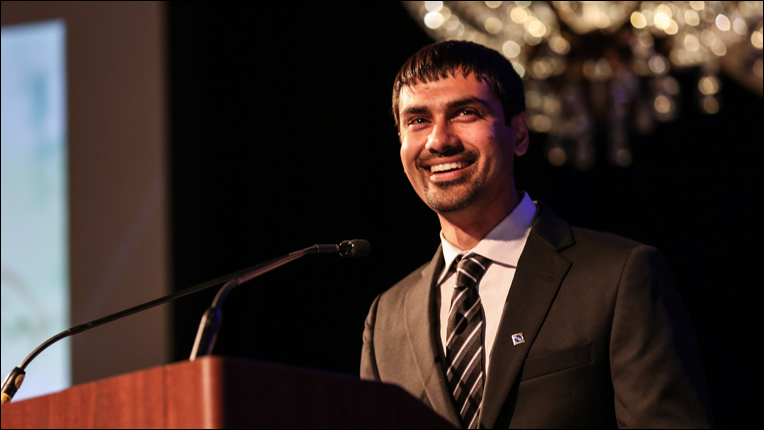 The award celebrates Chuck Thacker's pioneering contributions in computing and his long-term inspirational mentorship of generations of computer scientists. The award is accompanied by a prize of $100,000 with financial support provided by Microsoft. 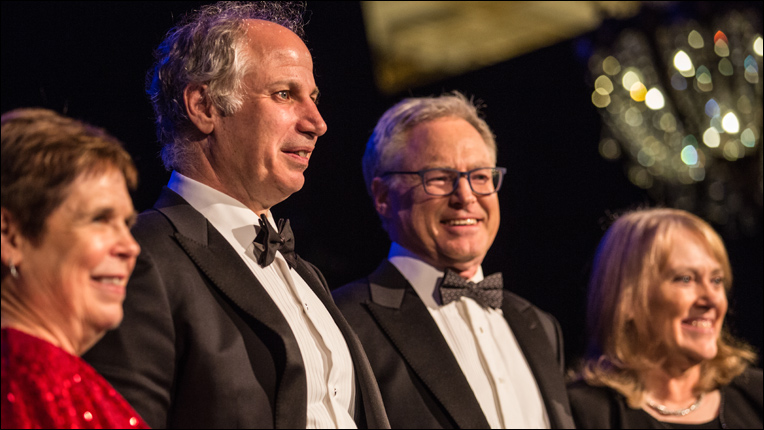 The ACM - AAAI Allen Newell Award was presented to Henry Kautz for contributions to artificial intelligence and computational social science, including fundamental results on the complexity of inference, planning and media analytics for public health. 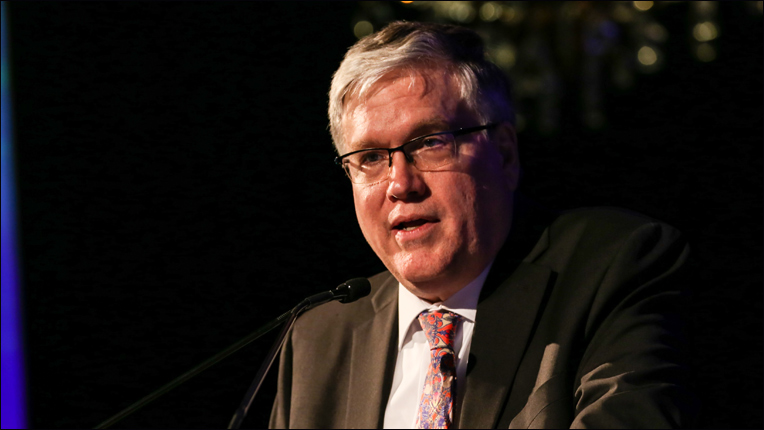 The Software System Award was presented to Gerald C. Combs for creating the Wireshark network protocol analyzer, an essential tool for nearly anyone who designs, deploys, analyzes and troubleshoots the wide range of network protocols that tie the internet together, and for continued leadership of the international Wireshark developer community. 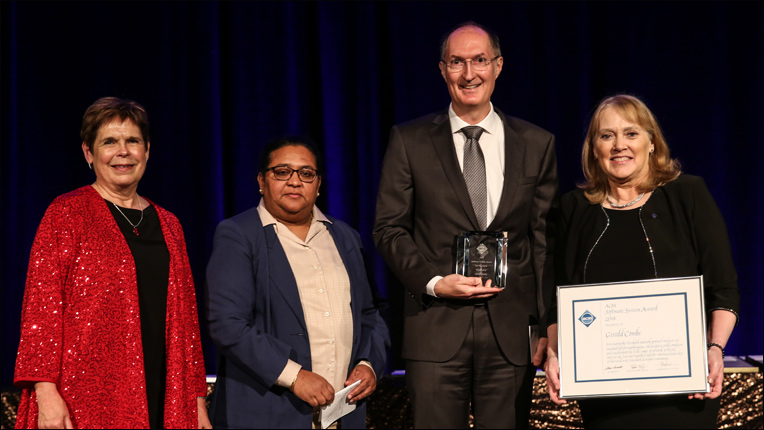 The Grace Murray Hopper Award was presented to Constantinos Daskalakis and Michael J. Freedman. Daskalakis was recognized for his seminal contributions to the theory of computation and economics, particularly the complexity of Nash Equilibrium. Freedman was cited for the design and deployment of self-organizing geo-distributed systems. 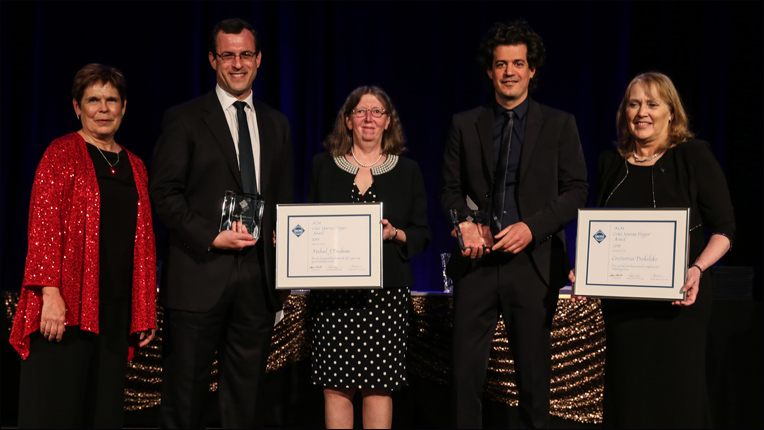 The Paris Kanellakis Theory and Practice Award was presented to Pavel Pevzner for pioneering contributions to the theory, design and implementation of algorithms for string reconstruction and to their applications in the assembly of genomes. 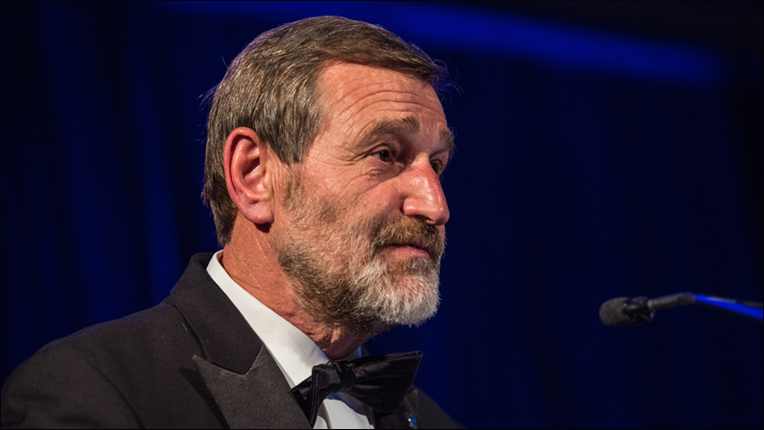 The Karl V. Karlstrom Outstanding Educator Award was presented to Robert Sedgewick for developing classic textbooks and online materials for the study of algorithms, analytic combinatorics, and introductory computer science that have educated generations of students worldwide. 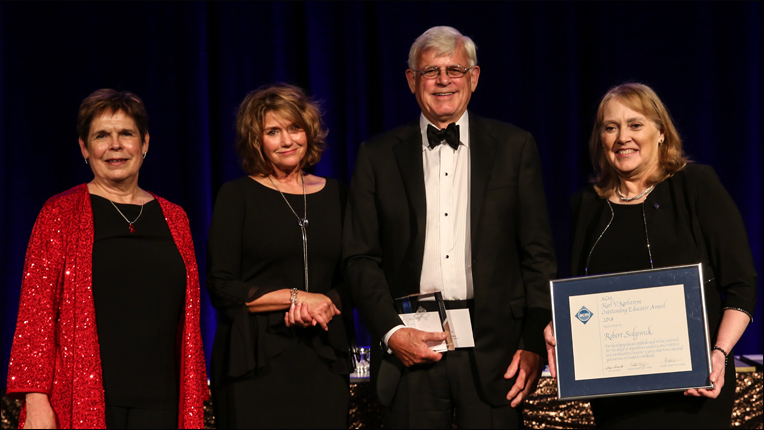 The Eugene L. Lawler Award for Humanitarian Contributions within Computer Science and Informatics was presented to Meenakshi Balakrishnan for his research, development, and deployment of cost-effective embedded-system and software solutions addressing mobility and education challenges of the visually impaired in the developing world.

The ACM Lawler Award recognizes an individual or group who has made significant humanitarian contributions through the use of computing technology. This biennial endowed award is accompanied by a prize of $5,000. 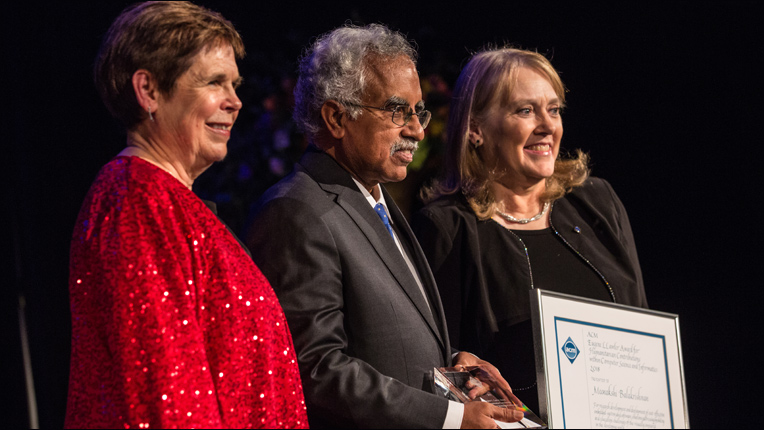 The Distinguished Service Award was presented to Victor Bahl for significant and lasting service to the broad community of mobile computing and wireless networking, and for building strong linkages between academia, industry, and government agencies. 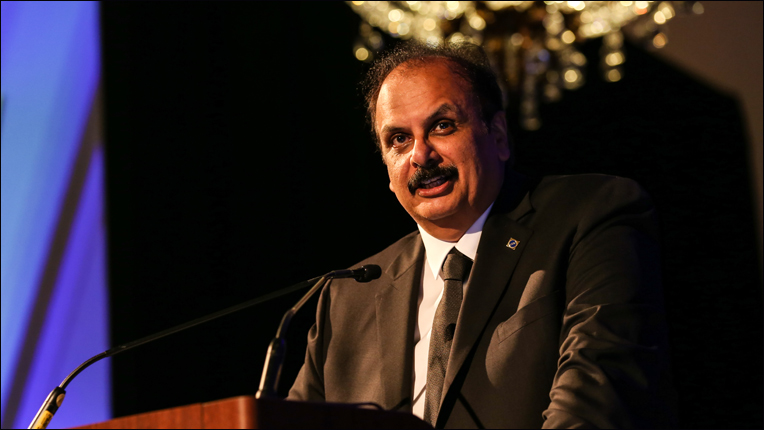 The Outstanding Contribution to ACM Award was presented to Chris Stephenson for advancing CS education by architecting and nurturing the Computer Science Teachers Association to incorporate more than 22,000 K-12 CS educators and partners into the ACM community. 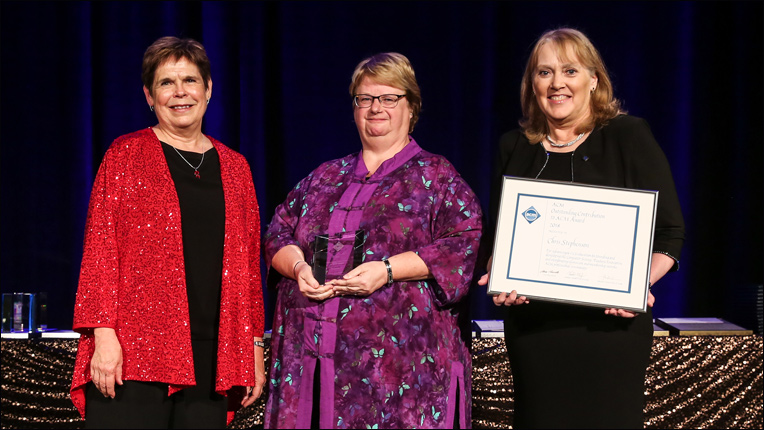 The ACM Athena Lecturer Award was presented to Elisa Bertino for pioneering and impactful contributions to data management and data security theory and systems, along with outstanding contributions to broadening participation in computing via professional leadership and mentoring.

The ACM Athena Lecturer Award recognition celebrates women researchers who have made fundamental contributions to computer science. The award carries a cash prize of $25,000, with financial support provided by Two Sigma. The recipient gives an invited talk at a major ACM conference of her choice. 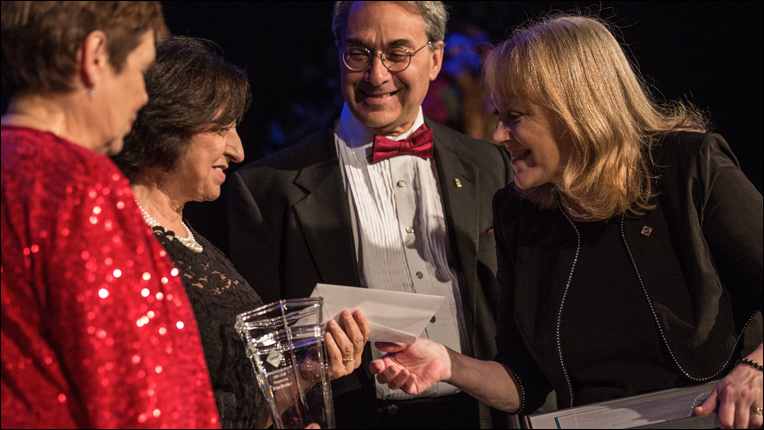 The ACM Presidential Award was presented to Vint Cerf, whose many ACM contributions include serving as ACM President, as Co-chair of ACM's Awards Committee, and on the ACM Council three times. He is also honored for establishing the ACM Fellows program. 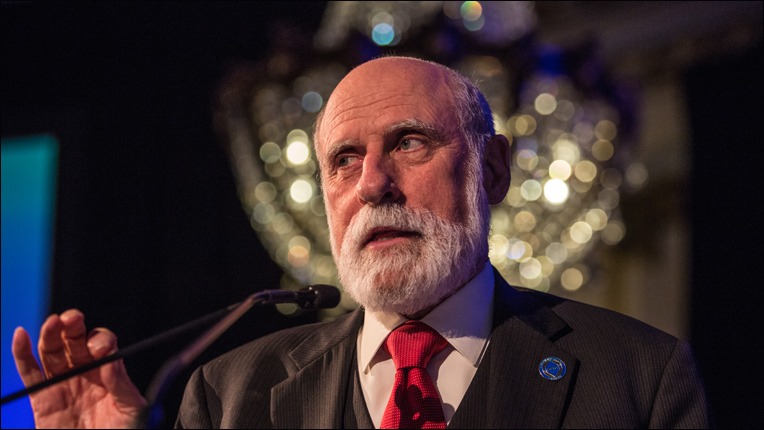 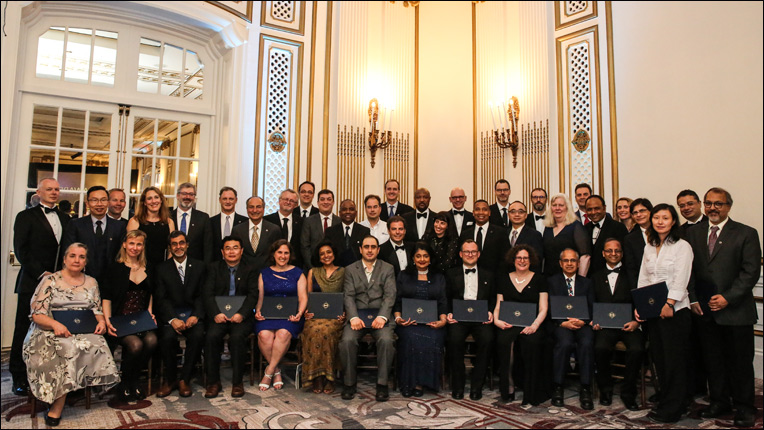 The Doctoral Dissertation Award was presented to Chelsea Finn of the University of California, Berkeley for her dissertation, Learning to Learn with Gradients.

Honorable Mentions were presented to Ryan Beckett and Tengyu Ma, who both received PhD degrees in Computer Science from Princeton University. Beckett's dissertation is Network Control Plane Synthesis and Verification, and Ma's dissertation is Non-convex Optimization for Machine Learning: Design, Analysis, and Understanding. 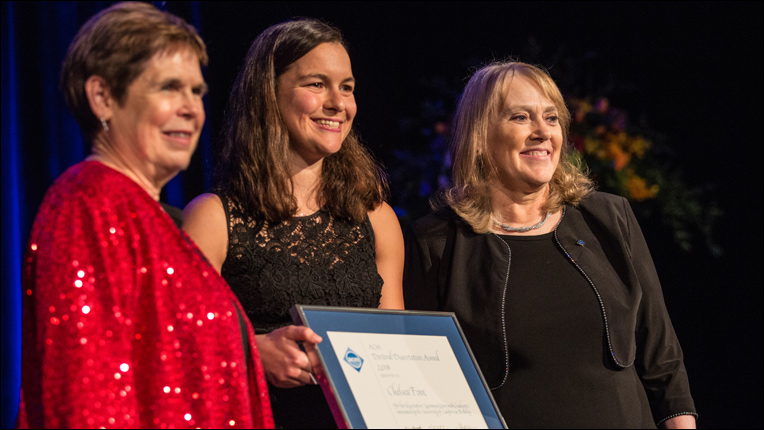 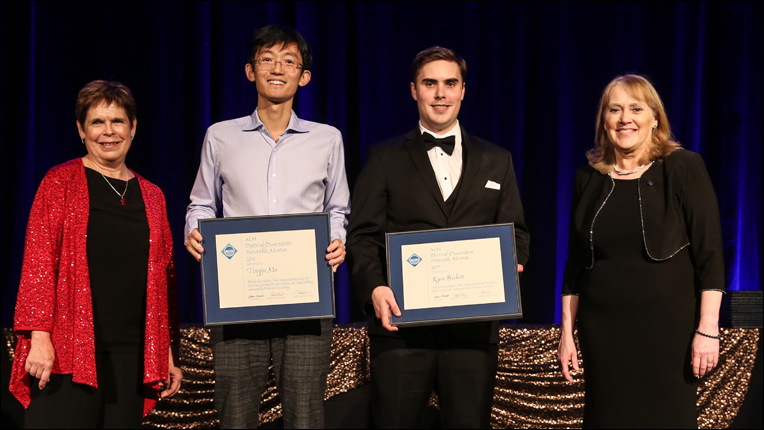 The ACM Student Research Competition (SRC) represents a unique forum for ACM undergraduate and graduate student members to present their original research. Student winners from Student Research Competitions held at the ACM ICCAD, SC, SIGCSE, SIGSPATIAL and Tapia conferences advanced to compete in the Grand Finals where their research contributions were evaluated, via the web, by the ACM SRC committee. Financial sponsorship of $120,000 is provided by Microsoft per competition year. The finalists honored represent the best student research of the past year. 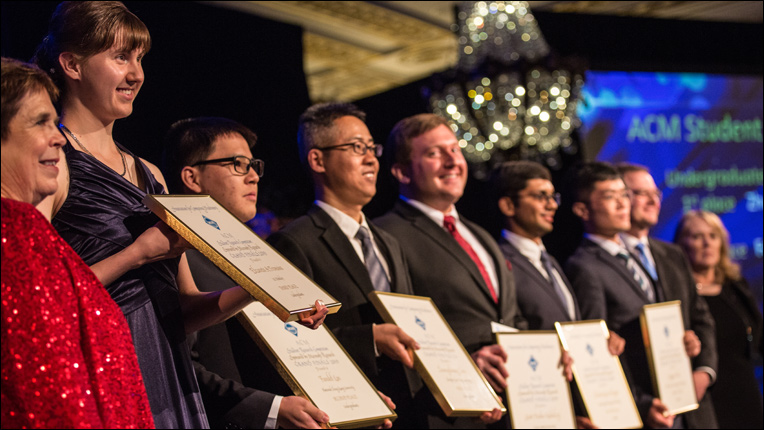 Each year, ACM recognizes technical and professional achievements within the computing and information technology community through its celebrated Awards Program. ACM welcomes nominations for candidates whose work exemplifies the best and most influential contributions to our community, and society at large. ACM's award committees evaluate the contributions of candidates for various awards that span a spectrum of professional and technological accomplishments. For awards presented at the annual June banquet, the deadline for award nominations is January 15, 2020, with the exception of the deadline for the Doctoral Dissertation Award nominations which is October 31, 2019.

In her article for the August issue of CACM, Dispelling Common Myths about ACM Awards and Honors, ACM President Cherri Pancake shares her insights on what elements make nominations effective. Pancake is a former ACM Awards Committee Chair.