The ACM Awards Banquet is an annual event recognizing technical excellence and outstanding service to the computing field. This year's banquet honoring the 2021 award recipients and newly inducted ACM Fellows was held at the Palace Hotel in San Francisco on June 11.

View our awards video playlist here, highlighting the 2021 award recipients' work, research, and contributions to the field of computing.

The ACM A.M. Turing Award was presented to Jack J. Dongarra for pioneering contributions to numerical algorithms and libraries that enabled high-performance computational software to keep pace with exponential hardware improvements for over four decades. Learn more about Dongarra's expansive career and the specifics, significance, and enduring impact of his past and present work on a wide range of modern computer systems in this short video. 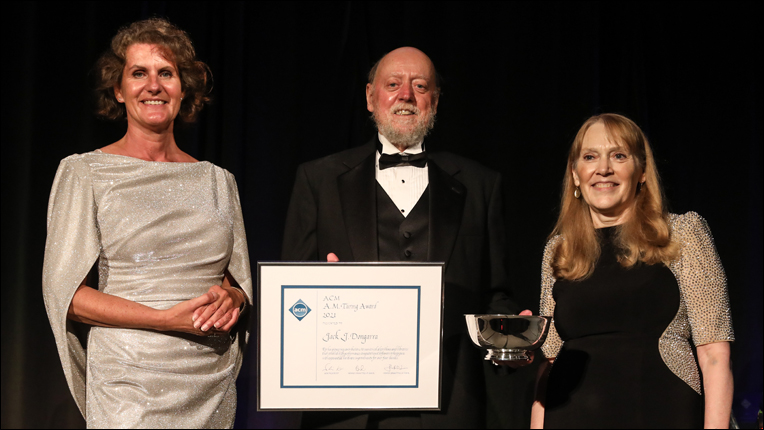 The ACM Prize in Computing was presented to Pieter Abbeel for contributions to robot learning, including learning from demonstrations and deep reinforcement learning for robotic control. Learn more about Abbeel's work with robotics and AI, his development of few-shot imitation learning, and the potential for robots to learn by themselves in this short video.

The ACM Prize in Computing recognizes an early- to mid-career fundamental innovative contribution in computing that, through its depth, impact and broad implications, exemplifies the greatest achievements in the discipline. The award carries a prize of $250,000. Financial support is provided by Infosys Ltd. 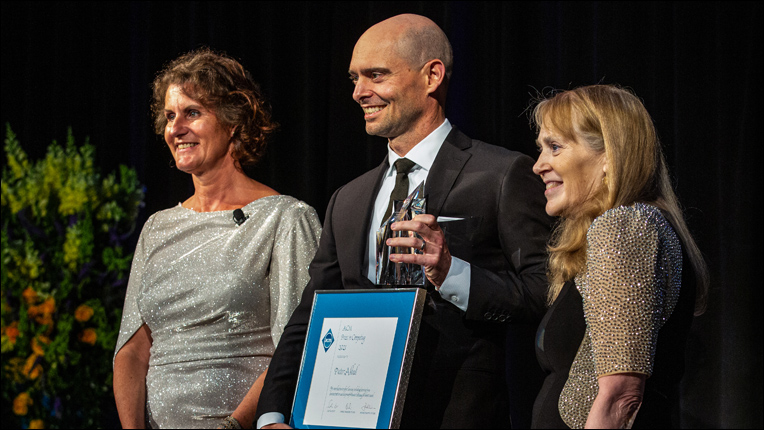 The ACM Frances E. Allen Award for Outstanding Mentoring was presented to Carla E. Brodley for significant personal mentorship and leadership in creating systemic programs that have increased diversity in computer science by creating mentoring opportunities for thousands at Northeastern University and other universities across the United States. Learn more about Brodley's data-driven mentoring practices, her efforts to increase the participation of historically marginalized people, and her founding of the Center for Inclusive Computing in this short video.

The ACM Frances E. Allen Award for Outstanding Mentoring is presented biennially to an individual who has exemplified excellence and/or innovation in mentoring with particular attention to recognition of individuals who have shown outstanding leadership in promoting diversity, equity, and inclusion in computing. The award is accompanied by a prize of $25,000 to the awardee with an additional $10,000 cash contribution to an approved charity of the awardee’s choice with financial support by Microsoft Research. 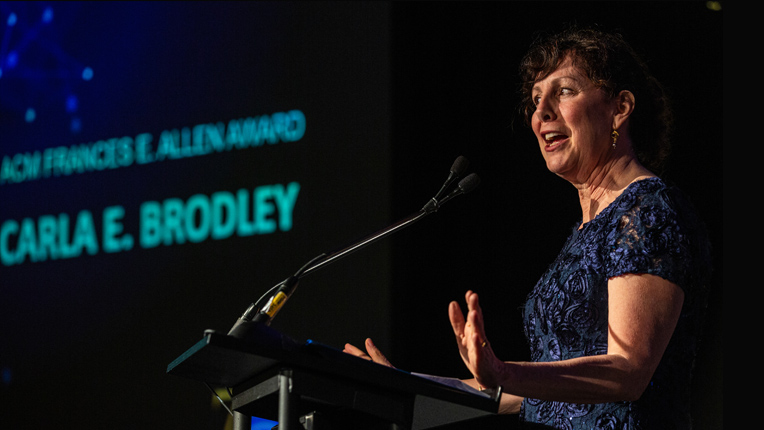 The ACM - AAAI Allen Newell Award was presented to Carla Gomes for establishing and nurturing the field of computational sustainability and for foundational contributions to artificial intelligence. Learn more about Gomes' achievements in her field, the mutual enrichment of computer science and sustainability, and how her research has involved both natural and man-made resources in this short video. 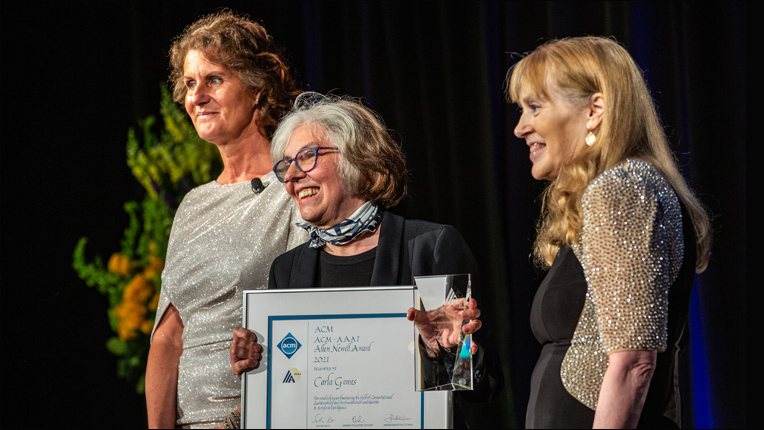 The Software System Award was presented to Xavier Leroy, Sandrine Blazy, Zaynah Dargaye, Jacques-Henri Jourdan, Michael Schmidt, Bernhard Schommer, and Jean-Baptiste Tristan for the development of CompCert, the first practically useful optimizing compiler targeting multiple commercial architectures that has a complete, mechanically checked proof of its correctness. Learn more about how CompCert was conceived, what it can do, and how it has led to a new age in verification in this short video. 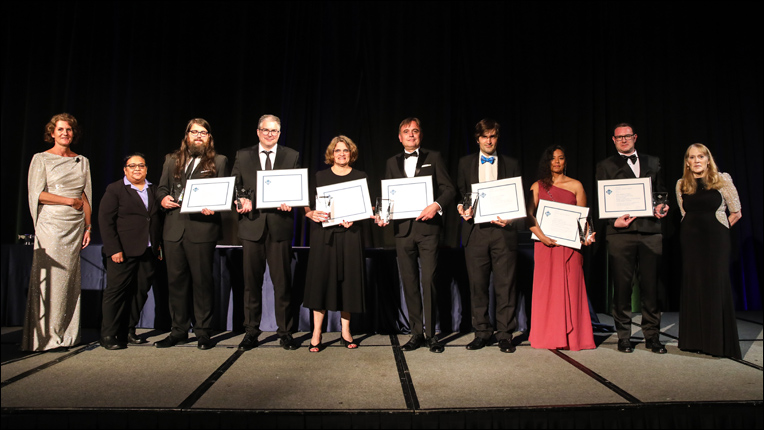 The Grace Murray Hopper Award was presented to Raluca Ada Popa, for the design of secure distributed systems. The systems protect confidentiality against attackers with full access to servers while maintaining full functionality. Learn more about how Popa combined specialized crytographic, privacy-preserving constructs with a smart building-block system approach to promote safe and secure computation in this short video.

The award is named for Admiral Grace Murray Hopper, a pioneer in software development whose work spanned programming languages, software development concepts, compiler validation, and data processing. The Hopper Award is presented to the outstanding young computer professional of the year, selected on the basis of a single recent major technical or service contribution. The candidate must have been 35 years of age or less at the time the qualifying contribution was made. A prize of $35,000 accompanies the award, with financial support provided by Microsoft Research. 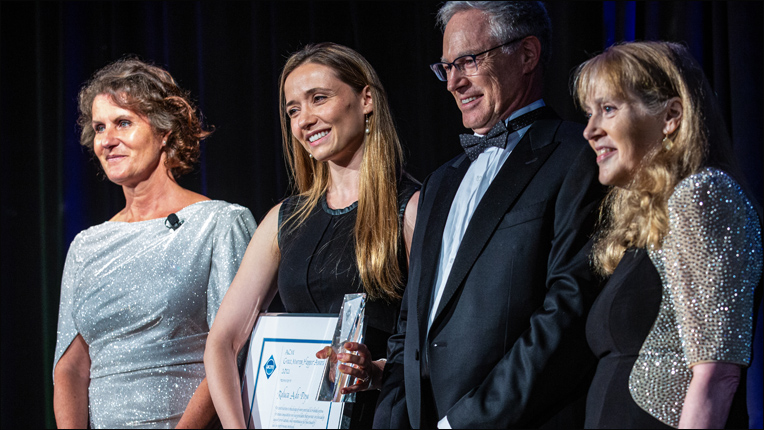 The Paris Kanellakis Theory and Practice Award was presented to Avrim Blum, Irit Dinur, Cynthia Dwork, Frank McSherry, Kobbi Nissim, and Adam Davison Smith for their fundamental contributions to the development of differential privacy. Learn more about how the recipients' series of papers introduced the theory of differential privacy, what it offers, and how it can be used in a wide range of applications in this short video. 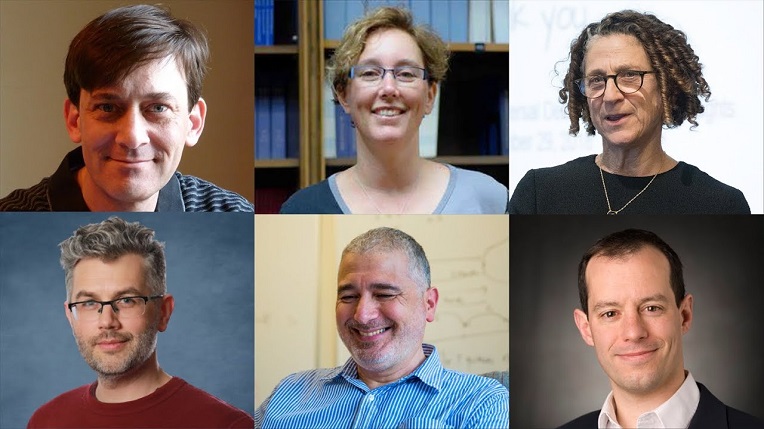 The ACM Policy Award was presented to Judy Brewer for her leadership of the Web Accessibility Initiative (WAI) and development of multiple web accessibility standards, which have been adopted globally and improved accessibility for millions worldwide. Learn more about Brewer's work in the WAI, the creation of the Web Content Accessibility Guidelines, and how her efforts have helped change countless lives in this short video.

The ACM Policy Award was established in 2014 to recognize an individual or small group that had a significant positive impact on the formation or execution of public policy affecting computing or the computing community. This can be for education, service, or leadership in a technology position; for establishing an innovative program in policy education or advice; for building the community or community resources in technology policy; or other notable policy activity. The award is accompanied by a $10,000 prize. 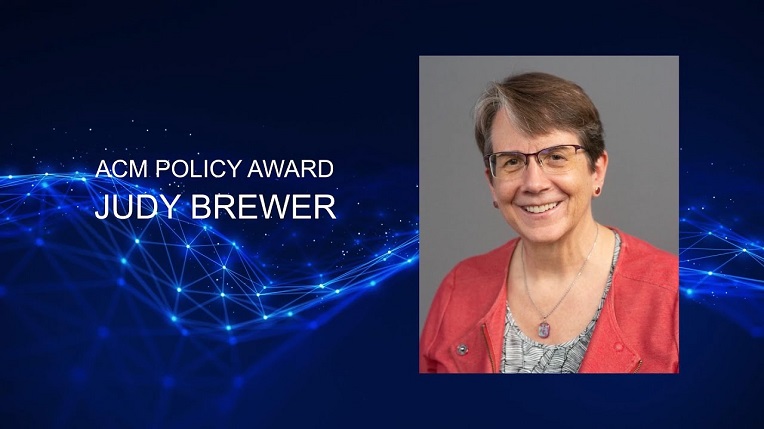 The Karl V. Karlstrom Outstanding Educator Award was presented to Mark Allen Weiss for advancing the art and science of CS education through his textbooks, research, and curriculum design, which have affected thousands of instructors as well as students around the world. Learn more about Weiss' decades-long efforts to make CS studies more viable and open and his guidance of overall CS education in this short video. 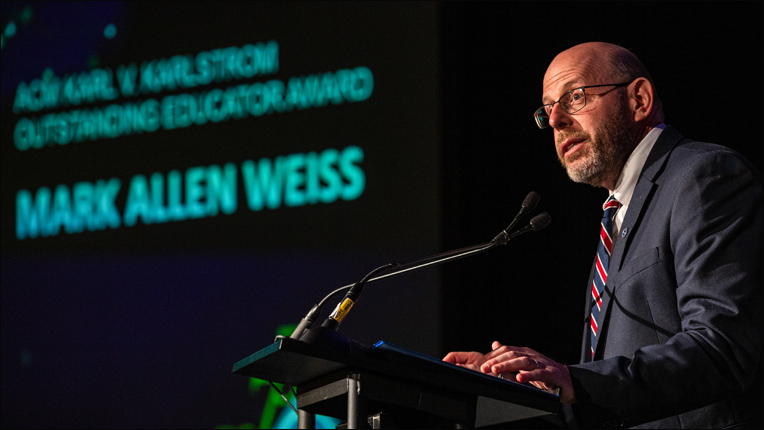 The Distinguished Service Award was presented to Erik Altman for leadership in the computer architecture communities, and for contributions to ACM's organizational development. Learn more of Altman's work to connect AMC's SIG communities, his efforts to engage members with daily news feeds that led to the creation of ACM TechNews, and his career in industrial computer research in this short video. 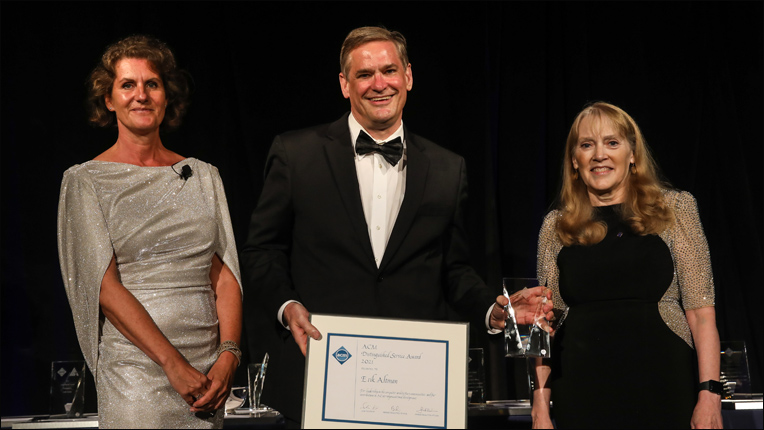 The ACM Athena Lecturer Award was presented to Éva Tardos for pioneering and impactful contributions to data management and data security theory and systems, along with outstanding contributions to broadening participation in computing via professional leadership and mentoring. Learn more about Tardos' extensive work in the field of algorithms, using game theoretic ideas to quantify performance gaps, and her teaching career in this short video.

The ACM Athena Lecturer Award recognition celebrates women researchers who have made fundamental contributions to computer science. The award carries a cash prize of $25,000, with financial support provided by Two Sigma. The recipient gives an invited talk at a major ACM conference of her choice. 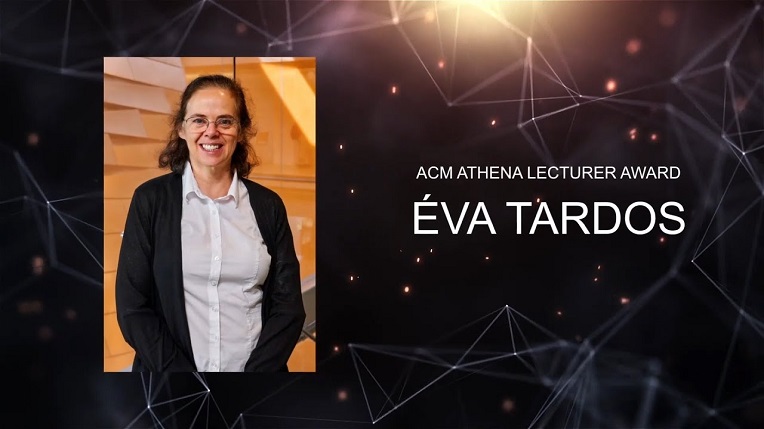 The ACM Presidential Award was presented to Dame Wendy Hall for her technical contributions that have significantly influenced the development of the Semantic Web and the field of Web Science; her leadership and impact in shaping the science and engineering policy agenda internationally; her advocacy and leadership in promoting informatics education throughout Europe through the Informatics for All coalition and other international groups; and her committed and inspired work to strengthen ACM's geographically diverse footprint and establishing and fostering regional councils to promote ACM activities in China, India, and Europe. Learn more about Hall's early career and her influence in the global computing community in this short video.

This award is given at the discretion of the ACM President, to individuals whose contributions in computing fall within the goals of the ACM. 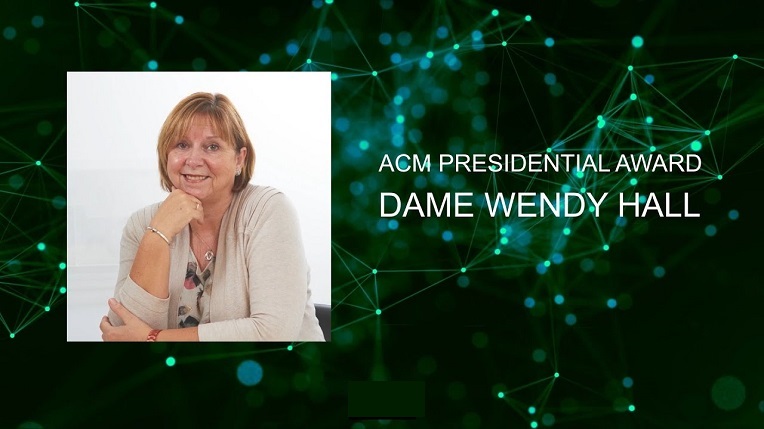 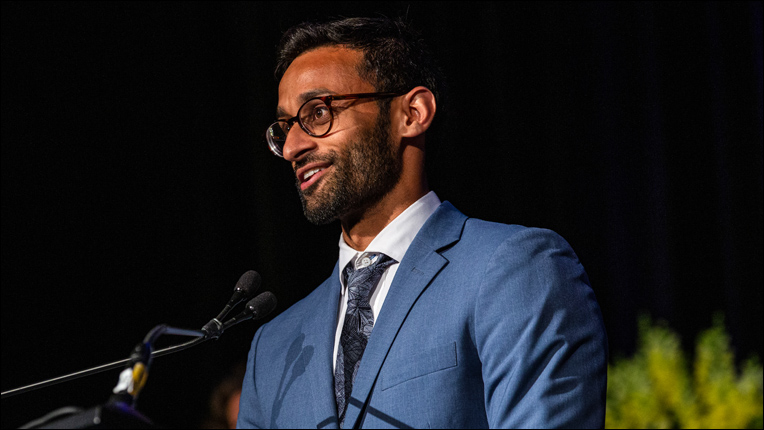 Each year, ACM recognizes technical and professional achievements within the computing and information technology community through its celebrated Awards Program. The first, most vital step in the process is the nomination of candidates whose work exemplifies the best and most influential contributions to our community, and society at large. ACM seeks your help in generating nominations for our 2022 Awards.

As you contemplate who might be nominated for various ACM awards, please consider ACM’s commitment to diversity, equity and inclusion. This commitment includes multiple aspects of diversity such as age, race and ethnicity, gender and sexual orientation, nationality, physical ability, thinking style, and experience. We encourage all potential nominators to take these factors into consideration when nominating. Candidates need not be ACM members to be nominated.

Please forward the ACM Awards Call for Nominations to your network through distribution lists, related organizations, and individual contacts to help ensure that deserving candidates are nominated.

ACM's award committees evaluate the contributions of candidates for various awards that span a spectrum of professional and technological accomplishments. For awards presented at the annual June banquet, the deadline for award nominations is December 15, 2022. Refer to the award nominations page for nomination guidelines and the complete listing of Award Subcommittee Chairs and Members.