My degrees were in Statistics and Mathematics, and I began my career in the early 1970s by teaching Mathematics and Geometry at ENSAD. By the end of the 1970s, I thought it would be useful for the students to work with computers. I started a computer graphics (CG) lab at ENSAD, but it was limited because computers were very expensive at that time.

We were lucky that François Mitterrand was elected President in 1981, as he thought it was important to bring art and technology together. As a result, we got some important governmental grants and my lab grew faster. As this was all new, I had to learn computer graphics and write software myself. ACM SIGGRAPH was an essential source of inspiration both for scientific papers and for their film and video presentations. The first SIGGRAPH conference I attended was in Anaheim, California in 1987.

Making CG characters by cloning humans. This has been a long-term goal for the CG community, but only in recent years have we made significant progress. At the same time, our brain still detects some very slight differences between a real human and a CG clone. We have to identify these differences.

Can you tell us a little about the Paris ACM SIGGRAPH Chapter?

The Paris ACM SIGGRAPH chapter started in 1983. Today we have about 60 members and 4,500 people following our activities. We try to reflect the diversity of professionals involved in CG and ones you would meet at the annual SIGGRAPH conference. For example, we have activities focused on the animation industry, virtual reality, research, and art. We also organize events related to the SIGGRAPH conferences, by sponsoring presentations by French CG people who were selected and just returned from the conference. We’ve also recently held Electronic Theater screenings, including short films. Presentations by CG leaders at companies such as Disney and Google have also been popular with our members. On the technical side, we also organize talks around the latest CG software, including Nukeygara’s Akeytsu and Isotropix’s Clarisse.

What advice would you offer someone who is just embarking on a career in computer graphics?

Our field is fascinating, with each year bringing new concepts and algorithms. But don’t think everything is new. Look ahead, but also have an eye to the past—to the foundations of this field. Many young people think that VR is new, and forget that first experiments and foundations were made 50 years ago. 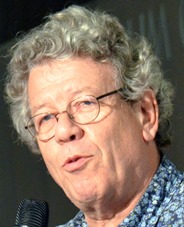 Pierre Hénon is an Honorary Professor at the École National Supérieure des Arts Décoratifs (ENSAD) in Paris, France, where he taught courses in computer graphics. One of his research interests is the history of computer graphics in France and he maintains a website on the subject.

Hénon is the President of the Paris Chapter of ACM SIGGRAPH and has been a member of SIGGRAPH for more than 30 years.