My research is in the wider area of software engineering, and, more specifically, nature-inspired computing. I completed my PhD in Formal Methods and my Bachelor’s in Physics. This made me realize that computing has reached an extreme level of continuously increasing complexity following an extreme rate of technological advancement, and led me to investigate natural systems exhibiting emergence (the study of how collective properties arise from the properties of parts). I tried to establish a well-defined, disciplined, scientific way to perform this research on natural systems. I was able to establish a framework to study diverse biological systems, such as the herding behaviour of large animals, as well as the characteristics of ants, bees, frogs and other systems found in nature. All of these systems exhibited emergence and achieved some remarkable properties, such as self-adaptation, self-organization, etc., that would be desirable in artificial systems.

I aimed to investigate ways of modelling artificial solutions mimicking those behaviours inherent in natural systems to achieve artificial systems that were self-adaptive and self-organizing. An architecture for IoT solutions in dynamic environments, based on our initial abstract bio-inspired overlay network proposal called EDBO, and its implementation as middleware, was a concrete outcome of this work. Currently, I am applying these findings to health monitoring, with a focus on chronic diseases.

In another vein of my research, I am interested in education using game-inspired approaches and storytelling. I have applied several of these ideas in teaching computer programming at many levels, as well as diverse topics including security and digital marketing in organizations.

The vision of the IoT, combined with the recent advancements in machine learning, brings some major challenges. Security and ethics are most probably going to be the main challenges to both society and academia. At the same time, there is a clear shift to distributed systems, and I would emphasize the need for solutions that will work reliably and autonomously in dynamic environments.

Will you tell us a little about the City College ACM-W Student Chapter at the University of Sheffield International Faculty?

Although not very large—having on average 20 members since the chapter was established in 2012—we organize several activities, such as Peer Tutoring, Java Cafe, and Help Me to Help You. All of these programs aim to establish networks to give members opportunities to meet and work with their peers to improve their technical, interpersonal, communication and teaching skills. The chapter managed to have a significant impact not only on our university but all universities and learning communities in Thessaloniki and the wider region.

Perhaps our most important event is the International Students' Spring Symposium that has been organized annually since 2002. Students and student societies in Thessaloniki organize the symposium under the supervision of members of the academic staff. Over two days, an average of 110 students from many different countries and institutions participate. An average of 15 high-quality presentations given by students take place, along with a number of invited talks and roundtable discussions. The ACM-W student chapter played a leading role organizing this event for the past seven years. Recently we have also merged with an annual doctoral student conference, forming a full week celebrating research in the Thessaloniki region.

Finally, the chapter contributes to the organization of several other international computer science-related conferences taking place in Thessaloniki.

How is being part of the ACM-W Student Chapter at the University of Sheffield beneficial to students?

All these activities offer students plenty of opportunities to develop skills and establish strong networks with peers from this region as well as established professionals from across Europe. I’ve seen how students involved with the chapter are highly inspired and motivated, and demonstrate professionalism and integrity. Students participating in the chapter have also shown effective leadership whenever required.

As Chair of the ACM Committee of European Chapter Leaders (CECL), what are some of your key priorities during your tenure?

Since its founding in 2013, CECL has created an effective communication channel among all ACM chapters in Europe and their leaders, as well as between all ACM members in Europe. CECL has substantially enhanced the visibility of ACM events in Europe. We are also proud of our mentoring programme, which significantly increased the number of ACM chapters in Europe. Working closely with the ACM-W Europe Council, we have also considerably increased the number of ACM-W chapters across the continent. By collaborating with ACM's Distinguished Speakers Program (DSP), we have also facilitated greater availability of ACM Distinguished Speakers to European ACM chapters. Another highlight has been the European ACM Chapter Leaders workshops in Paris, Athens and Prague, which achieved strong participation from European chapter members.

All in all, CECL has managed to galvanize chapters and motivate and inspire chapter leaders, improving the visibility of ACM, ACM Europe, and chapters; forge strong links among European chapters; and position ACM Europe as the venue for Europe-wide, interdisciplinary professional networking. None of these efforts would have been possible without the extremely hard work of all the amazing volunteers who composed this team. I encourage anyone who is interested to visit CECL's webpage to learn more about us. 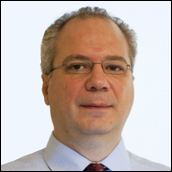 George Eleftherakis is a Reader (Associate Professor) and the Director of the PhD program at the University of Sheffield International Faculty in Thessaloniki, Greece. He is also a Visiting Professor at Transilvania University of Brasov in Romania. He has authored more than 95 publications on the interface of computer science, biology and engineering. His honors include receiving the Senate Award for Sustained Excellence in Learning and Teaching from the University of Sheffield.

Eleftherakis is a Senior ACM member and has been a member of the administration board of the Greek Computer Society since 2002. Since 2013 he has been the Chair of ACM’s Committee of European Chapter Leaders and a member of the advisory Committee of ACM-W Europe Council, participating actively in all womENcourage conferences in Europe. He is also the Faculty Advisor for the City College ACM-W Student Chapter at the University of Sheffield International Faculty.