How did you become interested in researching the behaviors of older technology users?

VLH: My interest started when I was with IBM Research in New York. There was an awareness of the need to make technology usable by everyone, across the age spectrum. As someone who had been interested in accessible technologies for many years, I was asked by IBM to lead their effort in this area. We began by engaging in collaborative work with the SeniorNet organization. When I moved to Scotland, there was already work underway both at the University of Dundee and at Newcastle University with older adults. I began collaborating with researchers at both institutions, although still largely along the lines of accessibility and usability. As part of that work, a large base of older users was established. These people became involved not just as research participants, but also as advisors to students and researchers alike about how technology fit into their lives. Their creative uses of technology sparked some of our statements in the CACM paper about ability to use the technology not being at the heart of why many choose not to use it.

BK: I always viewed this as my mom’s research area, and as an early career academic, my instinct was to carve my own path, developing expertise in designing trustworthy systems. As fate would have it, these worlds collided with MobileAge, a research project I became affiliated with which is looking to develop technologies that older adults can and will use. In my work on the project I began to see how getting older adults to use digital technology was not simply a matter of designing demonstrably trustworthy systems, or even systems that older adults could trust themselves to use. There were a range of factors that seemed unrelated to technological trustworthiness, and yet still related to older adults’ deployment of the language of trust and distrust, that was affecting their usage behavior. That opened up a whole new direction for my research. I would still describe my interest as being centered around trust, but older adults became an unexpectedly rich domain in which to explore that interest.

Among the many insights this research uncovered, was there one finding in particular that challenged your assumptions of older adults’ attitudes toward technology?

BK: It is interesting to me that pervasive discourse around older adults would have us believe that (annoyingly) they simply don’t understand that technologies are safe and useful. Perhaps I am 34-going-on-85, but the things I hear older adult participants in my studies complain about are the same things I complain about: systems are often badly designed, it is increasingly difficult to develop a real sense of mastery over our own privacy and security, and there are unwanted social implications brought by digital technologies. The main difference is that older adults have greater freedom to reject technologies, and have a convenient excuse that others are all too willing to believe is self-explanatory—that they are simply too old.

VLH: When I speak with people over the age of 65 about being an ”older adult” they almost always object that they don’t feel old. And yet when these same individuals talk about not using technologies as easily or as readily as they assume they ought to be, they will say they are ”too old” to do differently. This highlights that something about how the technology is designed isn’t working for them. Greater understanding is needed about what really underpins non-use. It is very hard for tech-savvy, often younger, developers to know what might be appealing to an older adult. In talking about older adults and digital technology over the years, I often hear assumptions that younger people today will not have difficulties with technology as they age. After all, they are good with current digital technology. Technology and societal norms are constantly evolving, however. What works when you are 20, 30 or even 50 will not work when you find you have become ”older.”

What differences, if any, do you predict in how older adults will be using technology, say, 15 years from now?

BK: As Vicki alluded to above, I think that as people age into being older adults they are going to experience the same difficulties in keeping up with technological change and the same frustrations in being forced to adapt to new ways of doing things. But I also think that the freedom to reject technologies is, unfortunately, going to become more limited. There will be less accommodation for those struggling to keep up, because there will be a greater expectation of digital proficiency. The fact that non-use of certain digital technologies would be socially and/or professionally crippling for many younger individuals means that they are not in a position to act as the corrective force that technological innovation requires. I worry that if we don’t come to understand older adults’ resistance to digital technologies as a signal to developers to consider some necessary course correction, we will see the erosion of users’ ability to influence the design of the technologies that surround them.

VLH: What Bran states is the beginning of what we, as technologists, need to understand about designing for a wide range of users. From an accessibility standpoint, there has been a tendency to design each application in isolation, often considering aging only from a disability perspective. There are more far-ranging issues to be considered if developers are to create applications and devices that will be adopted across the span of generations. In part this is a moral imperative, but worldwide demographics with aging societies also highlight the business imperative to be inclusive of older adults.

Why did you decide to undertake “The Wisdom of Older Technology (Non)Users” project as a mother-daughter team? Did you encounter any differences in approach? Will there be further Knowles-Hanson collaborations in the future?

VLH: We didn’t start off with the idea of doing a mother-daughter collaboration. We just started talking about work. Bran was bouncing off some ideas she had and, at some point, we just found ourselves naturally working together. It has been a genuinely exciting experience to connect on the research.

BK: For me, since older adults are not my area of expertise, I needed a sounding board. Mothers are great for that, and I happened to have a mother who has been doing research in this area for as long as I can remember. Our collaboration started with me asking whether the insights I was having seemed to make any sense at all, and I think by coming at it from a different starting point I was raising issues that my mom found interesting and worth exploring further. It worked surprisingly well, and because we currently live on two different continents, publishing together gives us a chance to spend time together at conferences. It’s win-win. We are excited about pursuing several follow-on studies. 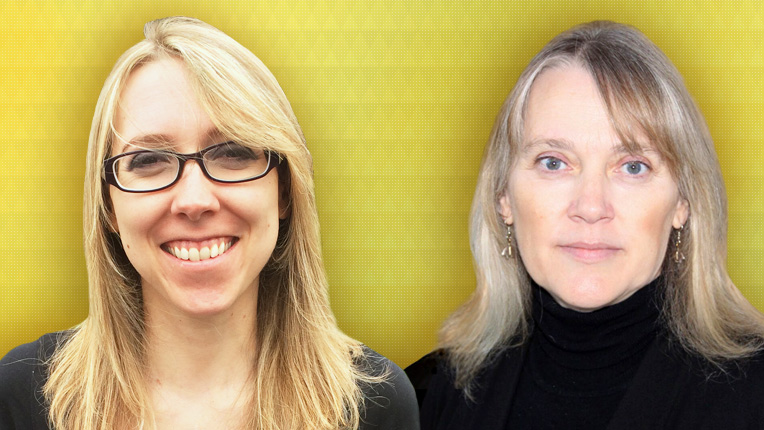 Bran Knowles is a Lecturer in Data Science at Lancaster University in Lancaster, UK. Her research interests include human-computer interaction, design interaction, and trust. Knowles has authored or co-authored 32 publications that have been published as part of conference proceedings and/or in scholarly journals. She is currently a lead researcher on “Child Proofing the Internet of Things,” a project which explores the privacy and security implications of platforms that enable children to program the IoT.

Her mother, Vicki L. Hanson, is President of ACM and is a Distinguished Professor at the Rochester Institute of Technology (RIT), as well as a Visiting Professor at Lancaster University. Hanson was named an ACM Fellow for contributions to computing technologies for people with disabilities. Her honors include an Honorary Doctor of Science degree from Newcastle University, UK, election to the ACM SIGCHI Academy, and receiving the ACM SIGACCESS Award for Outstanding Contributions to Computing and Accessibility. Her research interests are centered on human-computer interaction, accessibility, and aging, with a current effort related to ethical inclusion of people with disabilities in undergraduate computing education.

Knowles and Hanson recently co-authored The Wisdom of Older Technology (Non)Users, which was published in Communications of the ACM.