What prompted you to pursue a career in computing? What was the climate like for women in the field when you were starting out?

No computing classes existed in my undergraduate school's curriculum, but I loved mathematics and happily chose the field as a major. Of course, I read articles about computer science; and, since I always try to understand "how things work," I attended a lecture about programming, circa 1965. The lecture fascinated me, especially as the techniques complemented mathematics classes. During work on my Master's in pure mathematics in the early 1970s, I could not pursue applications of mathematics but returned to exploring computer science recreationally during PhD years. In the mid-1970s, I had no personal computer but purchased books and taught myself programming without benefit of a computer. By 1980 I had convinced DePauw University to hire me in a term position teaching Computer Science I, while I returned to graduate school to study computer science. 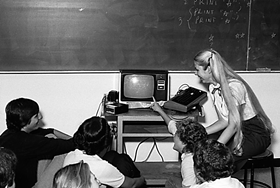 Not long after that, the school bought a Radio Shack TRS80. I rolled the machine through hallways and an elevator on a wheeled cart and took it into classrooms. Students gathered around me, sitting on the floor kindergarten-style. The Office of Publications sent a photographer to take this picture for one of its brochures, showing that DePauw was on the "cutting edge" of technology. Equal representation existed in 1981 with no need to worry about women's lack of participation in computing. I concentrated instead on making the transition from teaching mathematics to the pure joy of teaching computer science.

What is evolutionary computation and how do you see it influencing the field?

Here's an evolutionary computation (EC) definition in my own words: look at an interesting problem in nature; form virtual animals with arrays of genetic information; allow the organisms to mate; create children by combining parents' genes; apply mutation and fitness functions; purge some animals; repeat for thousands and thousands of generations and observe the final population in terms of the problem at hand. EC techniques yield highly optimized solutions to a vast array of problems in most disciplines. My colleagues and I received a National Science Foundation grant for "Theoretical and Empirical Studies of a Conditional Strategy: Environmentally Cued Pupal Color in Swallowtail Butterflies." My contribution to the study involved an EC simulation that produced essentially the same solution to a biological problem (given the same problem space) as a mathematical model developed by a colleague.

Recently, you have pursued research on autonomous robotics, with an emphasis on robotics for the elderly. What is an application of socially assistive robotics that will become prevalent in the near future?

Eldercare robots will appear in the near future, with the increases in numbers of seniors and healthcare costs and the simultaneous decreases in available healthcare workers. On one of my recent visits to Indiana University Bloomington (IUB, my alma mater), I toured a smart house for the elderly. (IUB recently received a large NSF grant to build a networked system of smart homes.) On the tour, I saw smart plants whose attentions by an elderly person unobtrusively informed a relative at a remote location about the alertness of the monitored senior.

Why are you hopeful that the participation of women in computing will increase in the coming years?

ACM-W's projects (e.g., ACM-W Chapters and ACM Celebrations) help to decrease isolation by creating communities for women. The fact that the numbers of both Chapters and Celebrations skyrocketed in the last decade is one hopeful sign for future parity. Without infrastructures (such as the ACM-W projects) for women's communities, role modeling, mentoring, and additional effective strategies cannot flourish. I am also hopeful about the role of male allies in increasing participation of women in computing. If each of our 100,000 ACM members devoted only 10 minutes a day to encouraging a woman or women to persist in computing, the combined effect of a million minutes of effort per day could move the needle toward parity. 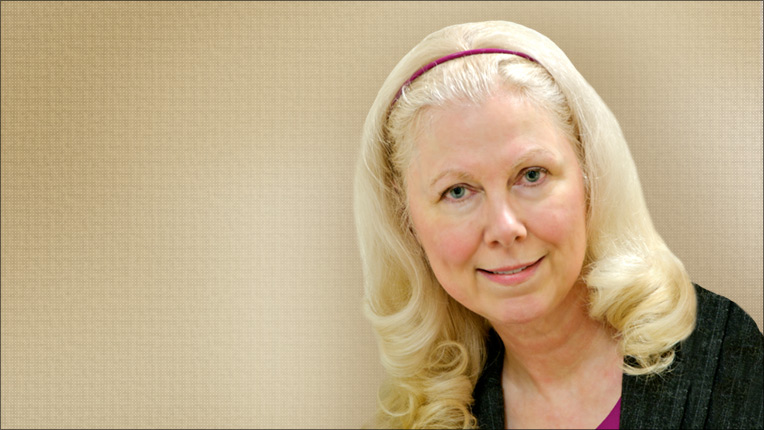 Gloria Childress Townsend is Professor and Chair of the Computer Science Department at DePauw University in Greencastle, Indiana. Her research interests include computer science education, computing ethics, evolutionary computation, and increasing the role of women and other underrepresented populations in computing. As a keynote speaker at SIGCSE 2019, Townsend discussed the strategies DePauw University employed to reach the milestone of awarding 47% of its undergraduate Computer Science degrees to women.

Townsend was active with the ACM Women’s Council (ACM-W) for 17 years, having played leadership roles in the growth of ACM-W chapters, as well as founding the ACM Celebrations initiative. Her honors include receiving the ACM SIGCSE Award for Lifetime Service to the Computer Science Education Community and SIGCAS's Making a Difference Award.