How did you initially become interested in assistive technologies?

A chance meeting with one blind person named Dipendra Manocha (at the Saksham Trust, a nonprofit organization that serves people with disabilities) nearly 17 years ago started me on this new journey and is responsible for the birth of the ASSISTECH initiative at IIT Delhi. Manocha, though formally trained only in music, was extremely technology-savvy and was very much aware of the work going on around the world in this domain. Further, he could specify requirements of the visually impaired in a manner engineers like us could easily understand and then translate into embedded or software-only solutions.

What was the biggest challenge you faced in developing the SmartCane, and how did you overcome it?

Not surprisingly, the electronics and software were implemented in the design rather quickly, as the IIT students who were working on it were not only very well trained but also very committed. On the other hand, the bigger challenges were the user interface, battery life and design of the handle. The SmartCane is a device that fits onto the top fold of a regular foldable cane used by the blind. There were two main challenges. First, the circumference of the device had to be small, otherwise many women would not find it comfortable. Second, the shape had to be such that users who were accustomed to holding a cane with three different grips did not have to change their grips to use the SmartCane. Innovative packaging and design also helped achieve this goal.

What is an important insight you’ve learned about taking a technology developed in a lab and disseminating it to the public as an affordable product?

We were lucky in one way: we got a very competent and committed partner in Phoenix Medical Systems (PMS), Chennai for production and support. At the same time, PMS did not have a background in assistive technology, so they were completely dependent on IIT Delhi and the Saksham Trust for dissemination. We created a team that was focused on traveling around India and training not only users but also special educators, who can act as local trainers in different regions when the product reaches their communities. We also worked on a project that created Braille and audio manuals, training materials for special educators, and materials for independent learning. This effort eventually paid off.

What are the other devices or technologies developed in the laboratory?

ASSISTECH has developed a number of other products and is working on scaling them. OnBoard is a device that helps visually impaired persons board public buses independently in the rather unstructured environments of public bus stops of Indian cities. A nonprofit startup named Raised Lines Foundation, based on the technology developed in the laboratory, is already producing affordable tactile books for supporting STEM education of visually impaired students. DotBook is an affordable refreshable Braille display using our own Braille cell technology that was launched in February 2019 but is undergoing some changes to facilitate volume production.

What are you working on now?

At present we are working on two major projects. Reading Assistant for Visually Impaired is a software package that aims to help in converting PDF files containing mathematics, tables and diagrams into a format that can be accessible with screen readers. We are also working on a Mobility Assistant for Visually Impaired, which uses AI techniques to support safe movement of visually impaired on Indian streets. This project is particularly challenging, as safe mobility requires making multilingual hand-painted signboards accessible. We also need effective methods to warn the visually impaired of approaching potholes, as well as any animals, one may encounter on Indian streets. 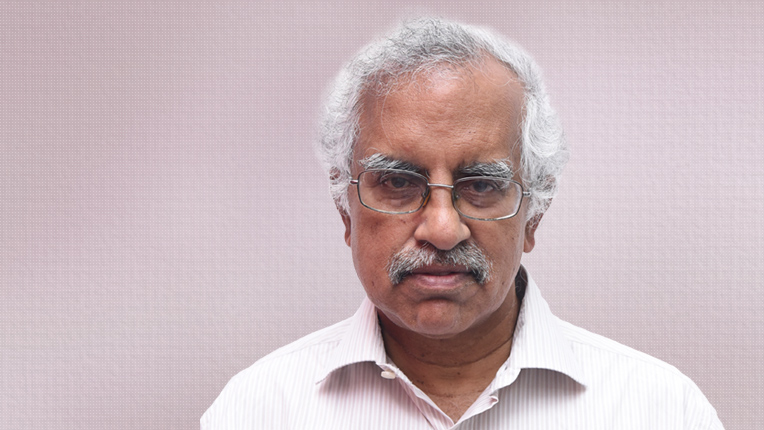 Meenakshi (M.) Balakrishnan is a Professor in the Computer Science and Engineering Department at the Indian Institute of Technology Delhi. His research interests include assistive technologies, embedded systems, electronic design automation (EDA) and system design, and field-programmable gate array (FPGA) architecture and tools.

Among the assistive technologies he has developed, Balakrishnan is perhaps best known for his SmartCane project, which allows the visually impaired to detect obstacles from knee to head within a distance of three meters using ultrasonic ranging. As these obstacles may be protruding objects without a footprint on the walking path, they may not be detectable by a simple white cane and can easily cause upper body injuries.

Balakrishnan, who is a recipient of two national awards from the Indian government for his work on assistive technologies, received the 2018 ACM Eugene L. Lawler Award for Humanitarian Contributions within Computer Science and Informatics. He was cited for research, development, and deployment of cost-effective embedded-system and software solutions addressing mobility and education challenges of the visually impaired in the developing world.