Election 2020 put scores of social and technology issues in high relief, but few as starkly as the importance of faith in our election systems. On Thursday, February 11 from 5:00 pm to 6:30 PM EST, a panel of experts convened by ACM's US Technology Policy Committee (USTPC) explored Technology & Trust: Voting in the Electronic Age in the latest USTPC "HotTopics" webinar.

Every 90-minute session of USTPC's new HotTopics webinar series will take attendees deep inside a pressing issue in the headlines, from artificial intelligence to quantum computing, with a focus on its implications for US law and policy. Expert panelists will provide their own insights and engage all participants in extended discussion.

James Hendler (Moderator), USTPC Chair, is the Director of the Institute for Data Exploration and Applications and the Tetherless World Professor of Computer, Web and Cognitive Sciences at RPI. He also heads the RPI-IBM Center for Health Empowerment by Analytics, Learning and Semantics (HEALS) and serves as a Chair of the Board of the UK’s charitable Web Science Trust. One of the originators of the “Semantic Web,” Hendler was the recipient of a 1995 Fulbright Foundation Fellowship, is a former member of the US Air Force Science Advisory Board, and is a Fellow of the AAAI, BCS, the IEEE, the AAAS and the ACM. He is also the former Chief Scientist of the Information Systems Office at the US Defense Advanced Research Projects Agency (DARPA) and was awarded a US Air Force Exceptional Civilian Service Medal in 2002. He is also the first computer scientist to serve on the Board of Reviewing editors for Science. In 2010, Hendler was named one of the 20 most innovative professors in America by Playboy magazine and was selected as an “Internet Web Expert” by the US government. In 2013, he was appointed as the Open Data Advisor to New York State and in 2015 appointed a member of the US Homeland Security Science and Technology Advisory Committee. In 2016, he became a member of the National Academies Board on Research Data and Information and in 2018 became Chair of the ACM’s US Technology Policy Committee (USTPC) and was elected a Fellow of the National Academy of Public Administration.

Edgardo Cortés is an advisor to the Election Security team at the Brennan Center for Justice, where he consults on the development of regulation, legislation and litigation. He has more than 15 years of experience in all facets of the electoral process including campaigns, nonpartisan voter registration, federal and state election policy, and local and state election administration. As Virginia’s first commissioner of elections, Cortés spearheaded voter registration and election administration modernization efforts in the commonwealth. Those efforts included: establishing paperless voter registration at DMV locations; fully integrating online DMV transactions with the online voter registration system; establishing an online, paperless absentee ballot request system; implementing an easier to use voter registration form; creating an online assessment of election administration at the local level, making election data more accessible to the public. Cortés also served as the chairman of the Board for the Electronic Registration Information Center (ERIC) and chairman of the US Election Assistance Commission Standards Board. He was a charter member of the Election Infrastructure Government Coordinating Council established by the US Department of Homeland Security. Cortés previously served as general registrar in Fairfax County, Va., and deputy director for policy and grants director at the US Election Assistance Commission. He has also directed congressional field campaigns and a national nonpartisan voter registration program and led efforts to implement automatic restoration of voting rights for individuals with prior felony convictions in Virginia. Cortés holds a Bachelor’s degree from Cornell University and a Master’s degree in political management from the George Washington University.

Andrew Grosso, Chair of USTPC’s Law Subcommittee, is a former Assistant US Attorney who started his law practice in Washington, DC in 1994. He is a graduate of the law school of the University of Notre Dame, and holds Master of Science degrees in both physics and computer science from Rensselaer Polytechnic Institute. As an Assistant US Attorney, he served from 1983 through 1994 in Tampa, in the Middle District of Florida, and in Boston, in the District of Massachusetts, concentrating in the criminal prosecution of government program fraud. He founded the Department of Justice’s first health care fraud task force, and was a founding member of the Department’s national Health Care Fraud Working Group. Grosso’s practice includes the prosecution of False Claim Act whistleblower or “qui tam” cases; high-tech commercial litigation; corporate compliance matters and internal investigations; internet and privacy law; and cybersecurity and cyber litigation. He has acted as counsel to the Massachusetts Institute of Technology and co-authored the resulting “Report to the President: MIT and the Prosecution of Aaron Swartz.” Grosso has served on the Council for the American Bar Association’s (ABA) Criminal Justice Section; has chaired that Section’s Committee on Science, Technology and Forensics; and has been a member of the Committee for the International Freedom for Scientists for the American Physical Society (APS). He has been a member of the public policy committee of the Association for Computing Machinery (USACM, now USTPC) since 1996. He also twice chaired the ABA’s National Institute for CyberLaw.

Douglas W. Jones is a computer scientist at the University of Iowa who has done extensive work on electronic voting. Jones received a BS in Physics from Carnegie Mellon University in 1973, and a PhD in Computer Science from the University of Illinois at Urbana-Champaign in 1980. Jones' work on electronic voting research began in late 1994, when he was appointed to the Iowa Board of Examiners for Voting Machines and Electronic Voting Systems. He chaired the board from 1999 to 2003, and has testified before the United States Commission on Civil Rights, the United States House Committee on Science and the Federal Election Commission on voting issues. He has observed use of electronic voting in Kazakhstan and the Netherlands, Jones was the technical advisor for the Emmy nominated HBO documentary Hacking Democracy (2006). He was a member of the ACCURATE electronic voting project from 2005 to 2011. In late 2009, the Election Assistance Commission appointed Douglas Jones to the Technical Guidelines Development Committee. With Barbara Simons, Jones co-wrote Broken Ballots: Will Your Vote Count? (CSLI Press, 2012), a book on voting machine technology.

Barbara Simons is a former President of ACM and the founder of ACM's US Technology Policy Committee (USACM), the predecessor of USTPC. She is the only woman to have received the Distinguished Engineering Alumni Award from the College of Engineering of UC Berkeley, where she earned her PhD in computer science. A fellow of ACM and of the American Association for the Advancement of Science, she also received the Computing Research Association Distinguished Service Award, the Electronic Frontier Foundation Pioneer Award, and ACM's Public Policy Award. Together with Doug Jones, she co-authored Broken Ballots: Will Your Vote Count? She has been on the Board of Advisors of the US Election Assistance Commission since 2008, and she co-authored the report that led to the cancellation of Department of Defense’s Internet voting project (SERVE) in 2004 because of security concerns. She was a member of the National Workshop on Internet Voting, convened by President Clinton, that conducted one of the first studies of internet voting and produced a report in 2001. She co-authored the July 2015 report of the US Vote Foundation titled The Future of Voting: End-to-End Verifiable Internet Voting. She chairs the Governance Board of Verified Voting, and is retired from IBM Research.

ACM’s US Technology Policy Committee (USTPC) joined many of the nation’s leading experts in cybersecurity, computing, and science in calling on all governors and state election directors to refrain from using any form of internet voting or voting app system in the 2020 elections. The joint open letter includes a detailed analysis prepared by the AAAS Center for Scientific Evidence in Public Issues which clearly demonstrates that internet voting is not a secure solution for voting in the US. 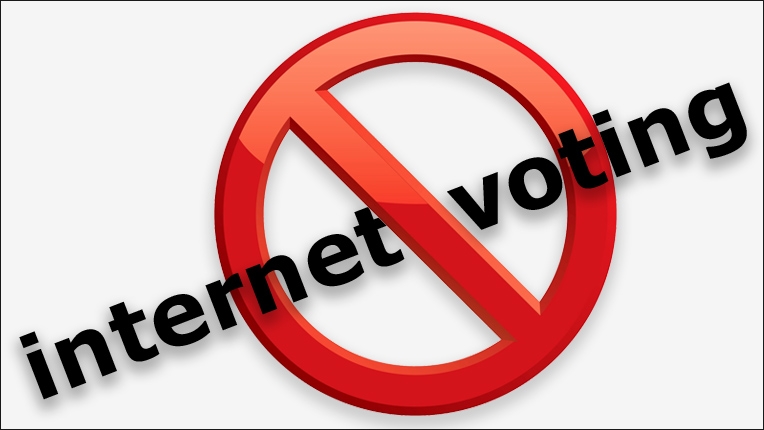 ACM's US Technology Policy Committee (USTPC) is joining with organzations including the National Election Defense Coalition, R Street Institute, and Common Cause to release a report citing concerns on the security of internet and email voting. The report cites the increasing impact of cyberattacks on ballots in transit; malware on the voter’s computer/device; voter authentication; server attacks; and more. Recommendations include a return to paper ballots and other "low-tech" measures.

Responding to its latest Voluntary Voting System Guidelines draft, ACM's US Technology Policy Committee urged the US Election Assistance Commission to keep existing language intended to assure that all voting technology must be isolatable, inspectable and interoperable. Its recommendations include requiring that all vendors certify that their voting systems fully comply with VVSG 2.0, rather than an earlier standard.