The ACM Awards Banquet is an annual event recognizing technical excellence and outstanding service to the computing field. This year's banquet honoring the 2016 award recipients and newly inducted ACM Fellows was held at the Westin St. Francis in San Francisco on June 24.

This was a special year for the ACM awards program. We celebrated 50 Years of the ACM A.M. Turing Award with two days of keynote talks and panel discussions highlighting the significant impact of the contributions of the Turing Laureates on computing and society, as well as looking ahead to the future of technology and innovation. You can watch videos of these historic presentations at http://www.acm.org/turing-award-50/video.

The ACM A.M. Turing Award was presented to Sir Tim Berners-Lee for inventing the World Wide Web, the first web browser, and the fundamental protocols and algorithms allowing the Web to scale. 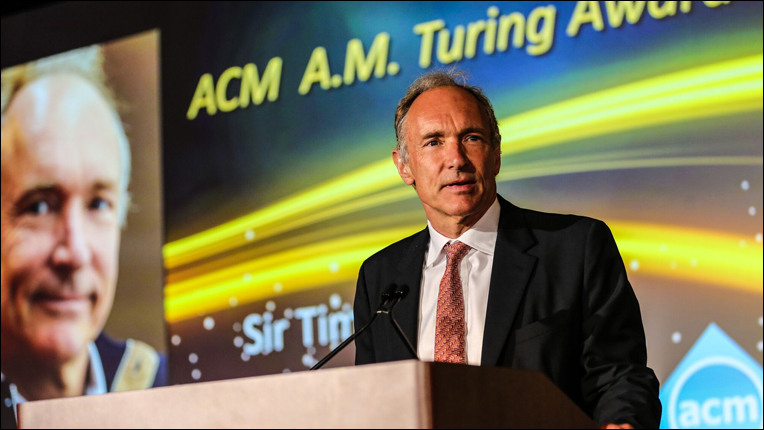 The ACM Prize in Computing was presented to Alexei Efros for groundbreaking data-driven approaches to computer graphics and computer vision.

The ACM Prize in Computing (formerly the ACM - Infosys Foundation Award in the Computing Sciences) recognizes an early- to mid-career fundamental innovative contribution in computing that, through its depth, impact and broad implications, exemplifies the greatest achievements in the discipline. The award carries a prize of $250,000. Financial support is provided by Infosys Ltd. 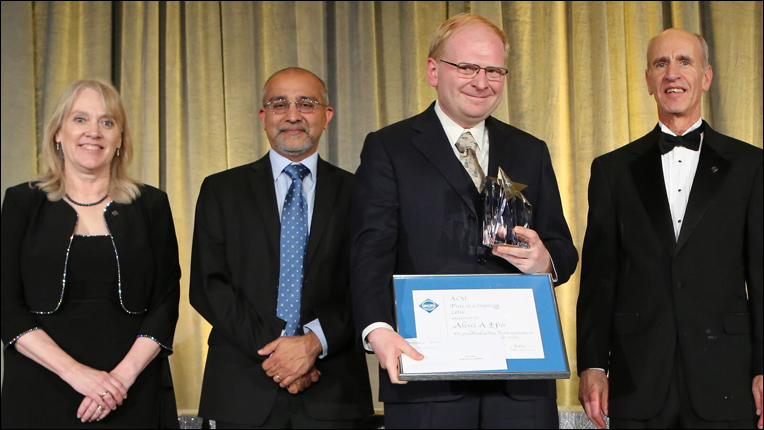 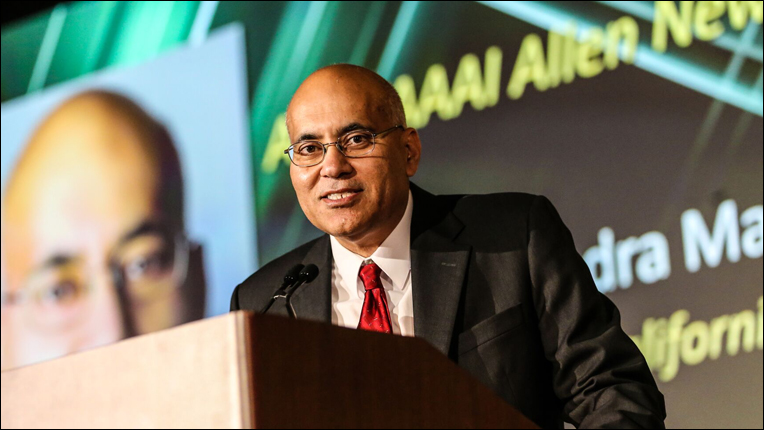 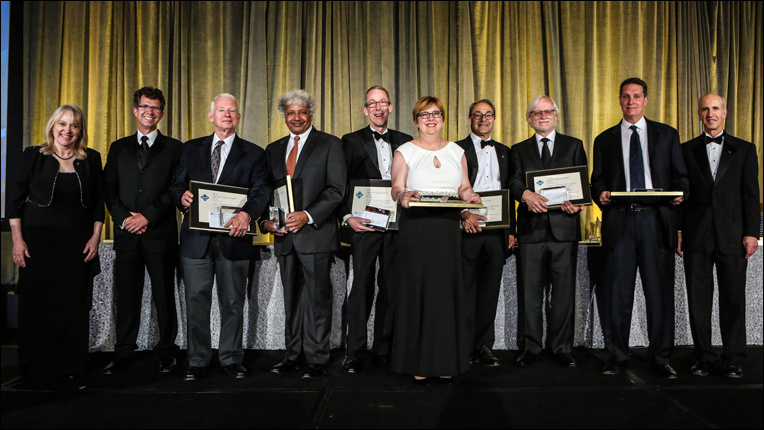 The Grace Murray Hopper Award was presented to Jeffrey Heer for developing visualization languages that have changed the way people build and interact with charts and graphs across the Web. 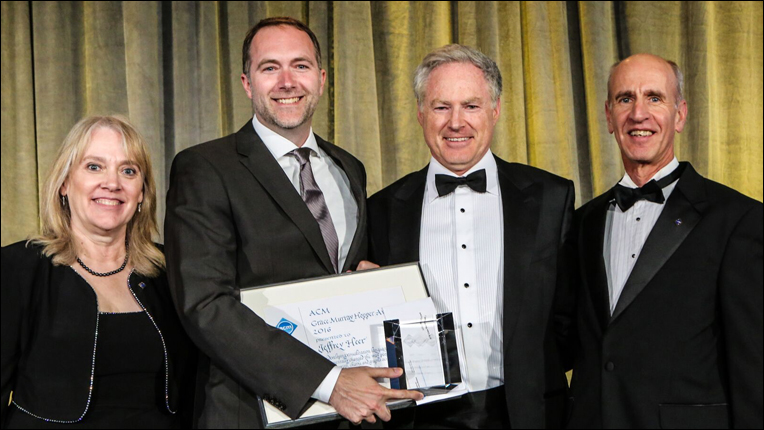 The Paris Kanellakis Theory and Practice Award was presented to Amos Fiat and Moni Naor for groundbreaking contributions to broadcast encryption and piracy tracking, laying the foundations for modern copyright protection of Blu-ray discs and other broadcast media. 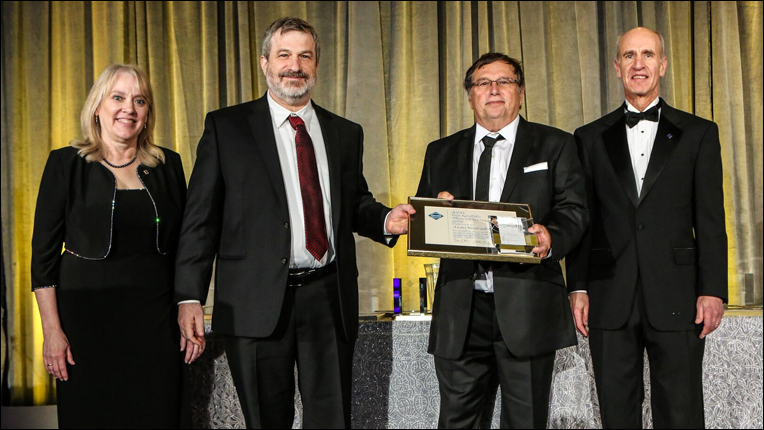 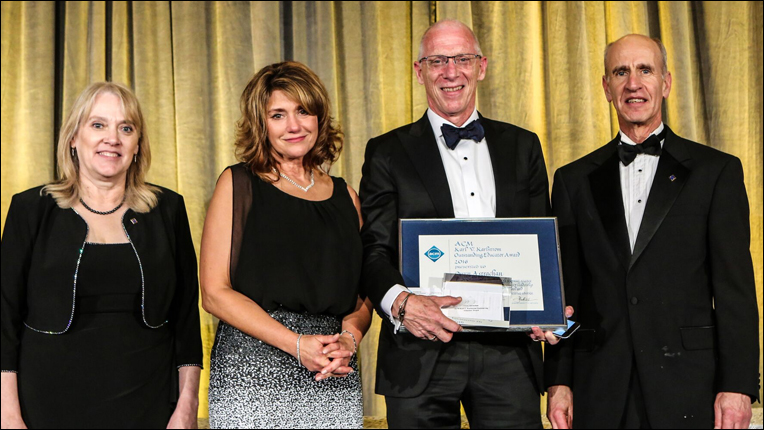 The Eugene L. Lawler Award for Humanitarian Contributions within Computer Science and Informatics recognizes an individual or group who has made significant  humanitarian contributions through the use of computing technology. This biennial endowed award is accompanied by a prize of $5,000. Eugene L. Lawler was one of the founders of combinatorial optimization, and also made significant contributions to algorithmic graph theory, complexity theory, and computational biology. Lawler encouraged efforts at the University of California, Berkeley to establish the Reentry Program for Women and Minorities, and was the first faculty advisor and an effective advocate of this program. 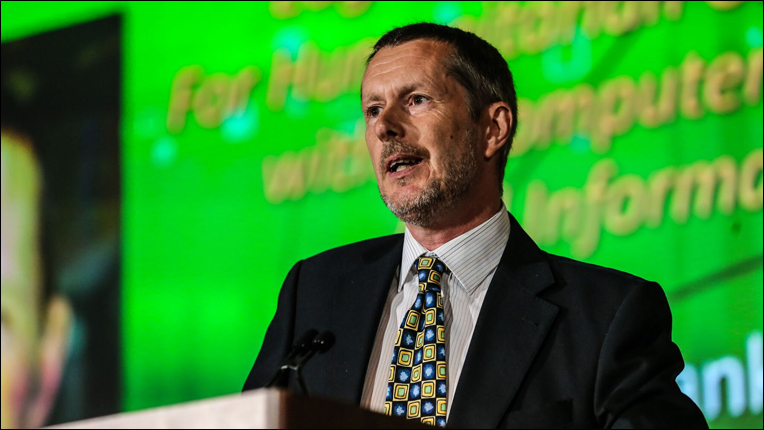 The Distinguished Service Award was presented to Leonard Jay Shustek for the establishment and success of the Computer History Museum, one of the world’s leading institutions in exploring the history of computing and its impact on society. 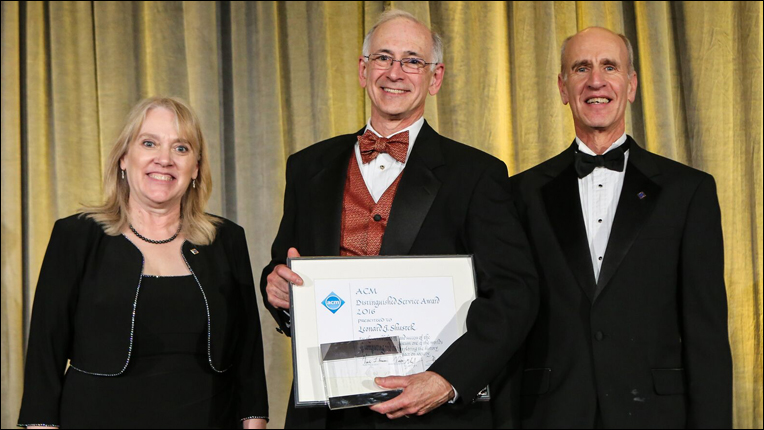 The Outstanding Contribution to ACM Award was presented to Valerie Barr for broadening the impact of ACM-W, increasing its effectiveness in supporting women in computing worldwide, and encouraging participation in ACM. 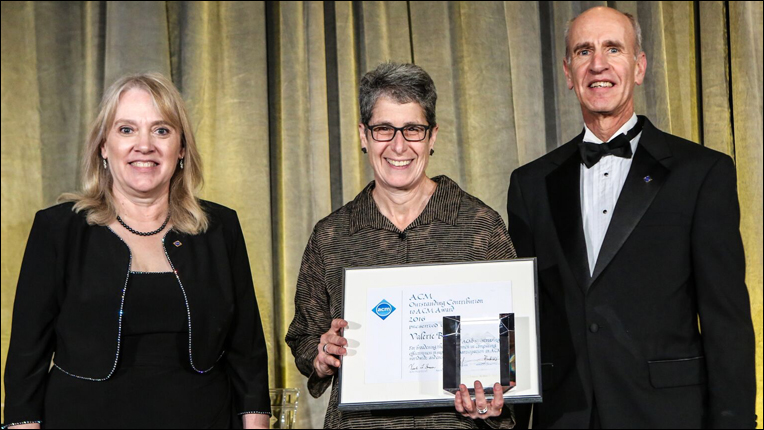 The Athena Lecturer Award was presented to Lydia E. Kavraki for the invention of randomized motion-planning algorithms in robotics and the development of robotics-inspired methods for bioinformatics and biomedicine.

Initiated in 2006 by the ACM Council on Women in Computing (ACM-W), the Athena Lecturer Award celebrates women researchers who have made fundamental contributions to computer science. The award carries a cash prize of $25,000, with financial support provided by Google. The recipient gives an invited talk at a major ACM conference of her choice. 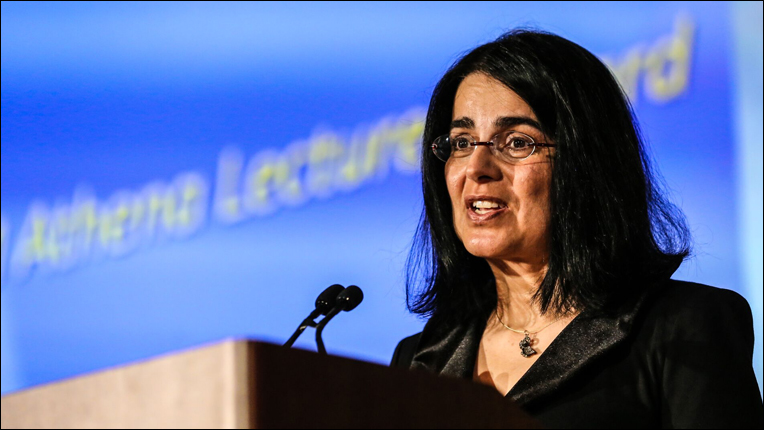 The ACM Presidential Award was presented to Moshe Y. Vardi for outstanding leadership over the last decade of ACM’s flagship publication - Communications of the ACM. 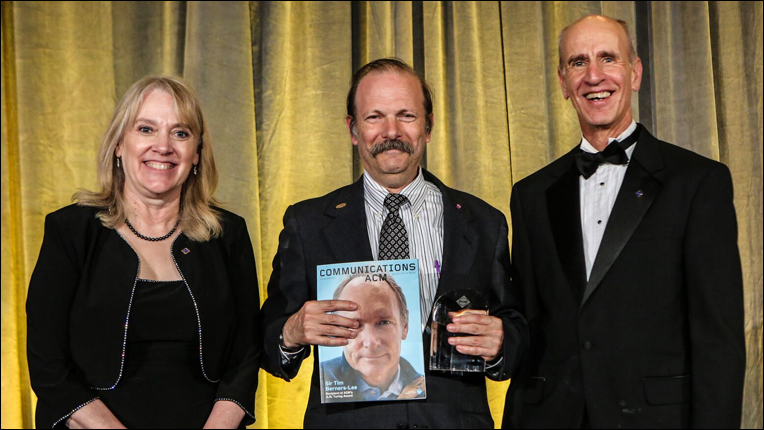 The ACM Fellows Program was established in 1993 to recognize and honor outstanding ACM members for their achievements in computer science and information technology and for their significant contributions to the mission of the ACM. The ACM Fellows serve as distinguished colleagues to whom ACM and its members look for guidance and leadership as the world of information technology evolves. 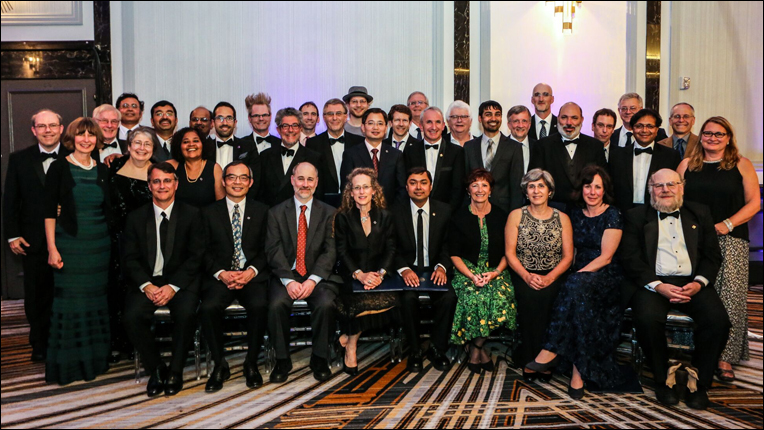 The Doctoral Dissertation Award was presented to Haitham Hassanieh of the University of Illinois at Urbana-Champaign for his dissertation, The Sparse Fourier Transform: Theory and Practice, nominated by the Massachusetts Institute of Technology.

The Doctoral Dissertation Award is presented annually to the author(s) of the best doctoral dissertation(s) in computer science and engineering. The award is accompanied by a prize of $20,000 and the honorable mention is accompanied by a prize totaling $10,000. Financial sponsorship is provided by Google, Inc. Winning dissertations will be published in the ACM Digital Library as part of the ACM Books Series. 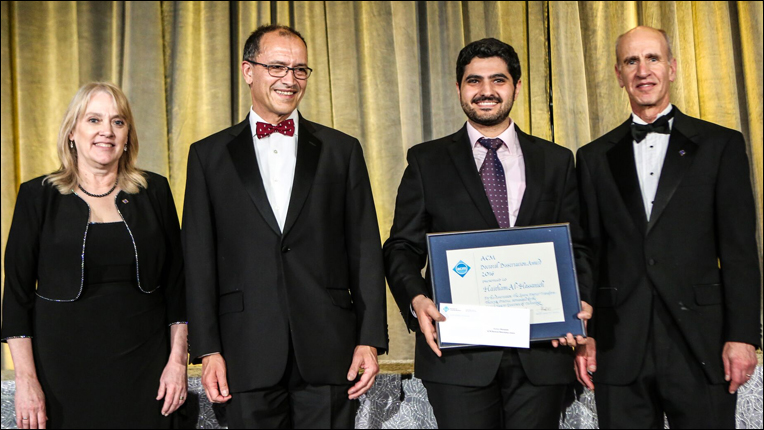 The ACM Student Research Competition (SRC) represents a unique forum for ACM undergraduate and graduate student members to present their original research. Student winners from the SIGACCESS, SIGARCH, SIGCHI, SIGCOMM, SIGCSE, SIGDA, SIGDOC, SIGGRAPH, SIGHPC, SIGMOBILE, SIGMOD, SIGPLAN, SIGSAC, SIGSOFT and SIGSPATIAL Student Research Competitions held at these conferences advanced to compete in the Grand Finals where their research contributions were evaluated, via the Web, by the ACM SRC committee. Financial sponsorship of $120,000 is provided by Microsoft per competition year. The finalists honored represent the best student research of the past year. 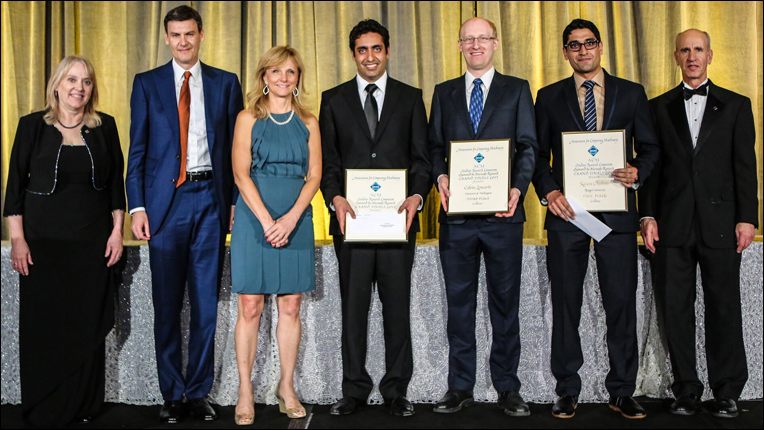 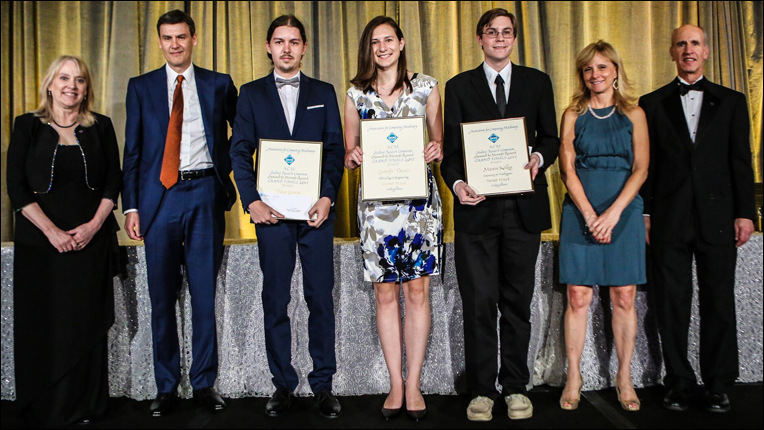 Each year, ACM recognizes technical and professional achievements within the computing and information technology community through its celebrated Awards Program. ACM welcomes nominations for candidates whose work exemplifies the best and most influential contributions to our community, and society at large. ACM's award committees evaluate the contributions of candidates for various awards that span a spectrum of professional and technological accomplishments. For awards presented at the annual June banquet, the deadline for award nominations has been changed from November 30, 2017 to January 15, 2018, with the exception of the deadline for the Doctoral Dissertation Award nominations which is October 31, 2017.